Write you own Travel Story…

Pass remains closed during winter due to heavy snow from November end to May end. Visitors can drive up to MARHI below ROHTANG with similar high-altitude topography, forest of Birch, Fir and Spruce. Once we cross the Rohtang Pass border we are in the Barren Himalayas with the landscape completely changing Khoksar is the first village and gate way to Lahaul... 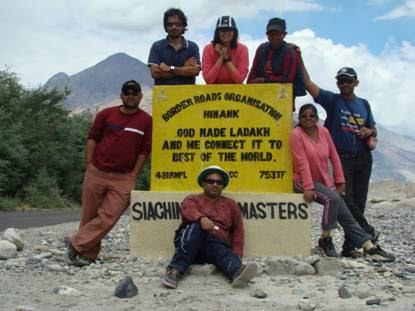 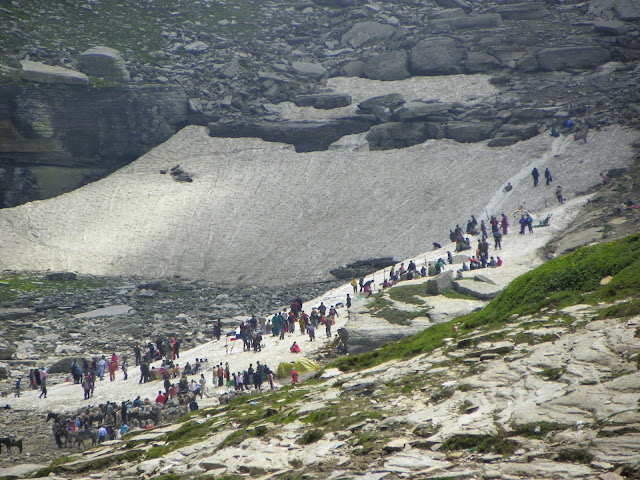 
Day 02
Manali Rohtang Pass Koksar Keylong Lahaul Spiti Jispa - Depart Manali early in the morning our first halt is Marhi A barren landscape offering extensive views of the valley and the mountains. We proceed to Rohtang Pass 3790 M is most popular with visitors, being one of the highest road point and gateway to LAHAUL and SPITI valleys. Pass remains closed during winter due to heavy snow from November end to May end. Visitors can drive upto MARHI below ROHTANG with similar high altitude topography, forest of Birch, Fir and Spurce.Once we cross the Rohtang Pass border we are in the Barren Himalayas with the landscape completely changing Khoksar is the first village and gate way to Lahaul Overnight stay in Jispa .

Day 03
Jispa  to Sarchu- Jispa to Sarchu -Enroute Darcha is situated at the junction of Yotche nullah and the Zangskar chhu which takes off from the Shinkun la. Both these nullahs meet with the main river Bhaga at this place. The valley broadens out from Darcha. The altitude of Darcha is about 3500 m. which makes it an ideal base camp for acclimatisation. Darcha is the jumping off point for treks to Padum over the Shinkun la or Baralacha la and Phirtse la and for treks or mountaineering expeditions to Leh and peaks of Chandra Bhaga series. However no tourist bungalow or rest house facilities are available on either side of the nullahs. A police check post is also there. Darcha is the last village where one can see sparse growth of trees. Beyond Darcha not even a single tree can be seen on either side of the highway. Landscape starts looking desolate and absolutely barren. Glance at JISPA. This beautiful spot is 22 kms away from Keylong and 4 kms ahead of Ghemur. The village is situated at the junction of two nullahs with the main river Bhaga. Jispa has a very large dry river-bed, a rarity in Lahaul.Jispa is a new tourism centre coming up with the monasteries of Yarji and Photang where his Holiness the Dalai Lama gave the Kal Chakra sermon a few days back to the Buddhists all over the world. The mountaineering Institute of Manali has a sub centre here for adventure tourism. Sarchu is the last inhabited point in Himachal Pradesh on the Manali-Leh route- which is regarded as one of the highest highways in the world. Arrive in Sarchu and check into your Camp.  Overnight in Camp 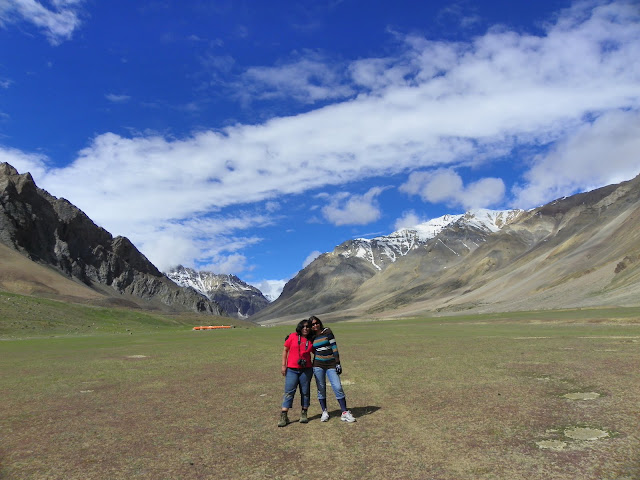 Day 04
Sarchu Nakeela La changla Pass More Plains and reach Leh- Sarchu to Leh  Depart in the morning at dawn. Our journey through Nakeela & Lachlangla Pass 16,617 ft, Reach Pang by afternoon lunch break at Pang, enroute. More Plains (Biggest and Highest Plateau on Earth on Stretch of 42 Kms), Taglang La Pass (2nd Highest Motorable Road in the World at A Height of 17,585ft) & reaching Upshi, from here the road follows the Indus River, passing villages with there terraced Fields and neat- Whitewashed houses. On a way one notice the ruins have an ancient Fort or palace or the distant glimpse of gompa on a hill. And at last reaching Leh .Over night in Leh

Day 05
Shey Thiksey Hemis -Excursion to Shey, Thiksey, Hemis
Today we proceed for Indus Valley monastery tour. We start with a visit to Shey the ancient capital of Ladakh. The monastery here has a huge gold-gilded statue of Buddha Sakyamuni with a large silver lamp burning in front of the statue.
Then we visit Thiksey Gompa an impressive complex rising tier upon tier on a hill above the village. The monastery has a beautiful 30 m high gold-plated statue of Maitreya Buddha, the Buddha of the future. Drive further to visit the famous Hemis Gompa founded in 1630's by Stag-tsang-ras-pa under the royal patronage of Sengge Namgyal.
Hemis is one of the largest and richest Gompas of Ladakh. The two-day festival of monastic dance in June-July has raised the reputation of Hemis particularly high. The festival is dedicated to Guru Padmasambhava, popularly known as second Buddha and responsible for spreading Buddhism in the Tibetan world. Later in the evening we drive back to hotel Overnight in Leh 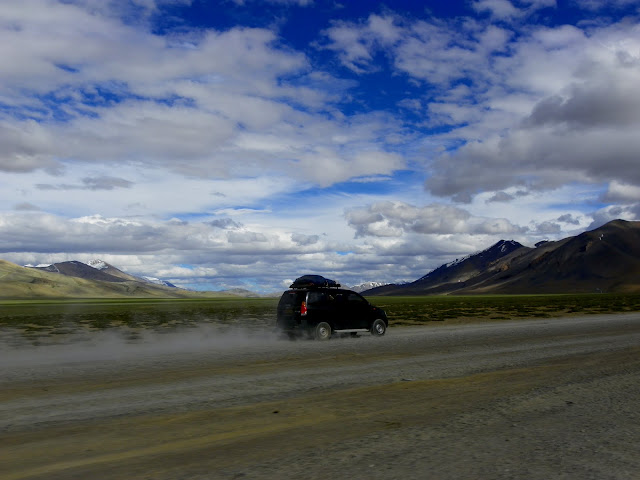 Day 06
Khardungla K Top Nubra Valley- Tour of Khardungla Pass 18832 Ft , Nubra Valley and Hundur Sand Dunes  –  Drive 120 Kms 4/5 Hrs ( Temperatures below Freezing point at Khardungla Pass) ensure to carry heavy winter clothes as most of the time this pass has snow .Khardungla is the World's highest motorable road at 18832 feet above sea level. At Khardungla pass the snow capped peaks and the mountain views are amazing. The road then passes through a bridge laid on Glacier which finds its way in Guinness Book of world records , Drive through the Valley which is extremely beautiful for photography.Nubra Valley is the Oasis of Ladakh as you see some colourful trees in this region. Later reach your camp  visit the Sand Dunes if lucky you will get the sight of the Two Hump Bacterian camels, enjoy time at  the Sand Dunes of Nubra valley spread across Hundur Village . OverNight at the camp 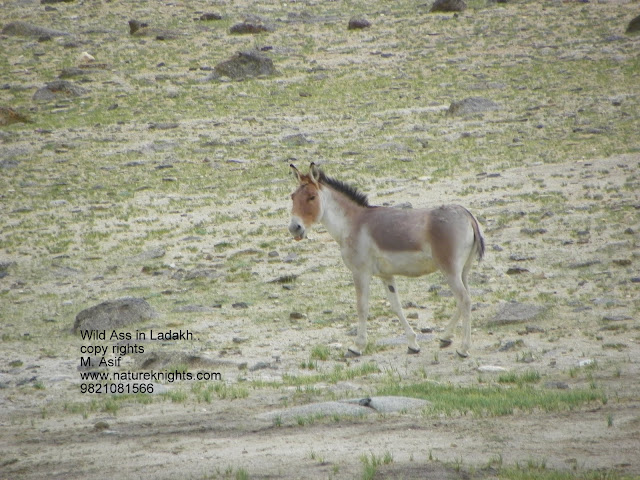 Day 07
After Breakfast proceed toDiskit monastery which is 515 years old situated on a hill top giving panoramic view of the valley later walk around the town of Diskit which has a small village market. Giant Buddha Statue. Proceed back to Leh cross Khardungla Pass once again and reach Leh.  over Night at the Hotel in Leh.

Day 08
Tour of Pangong Lake- It is the highest land locked lake ( 155 Kms One way from Leh 05 Hrs driver  each way . After an early breakfast we Leave for Pangong Lake through Changla pass 5486 Mtrs. Pangong Lake, situated at 14,000 feet (4,267 m). A long narrow basin of inland drainage, hardly six to seven kilometer at its widest point and over 130km long, it is bisected by the international border between India and China. A few years back the government decided to open it to tourists though the lake and its surrounding is under army surveillance. Enjoy the landscape in the back drop of the Lake. One rarely feels so close to nature and environment and the scenery is unforgettable.  Over Night at Pangong Lake Camp

Day 09
Drive back to Leh, you are driven back to Leh enroot visit Thiksey Monastery, located on a hill-lock with formidable views of the Indus valley. Thiksey is especially noteworthy for its gigantic seated statue of the Maitreya and is also known for its (Dukhang) assembly hall which houses hundreds of rectangular prayer books, stacked between wooden covers and bound in silk. After that we continue drive for Leh Over Night at the Hotel in Leh. 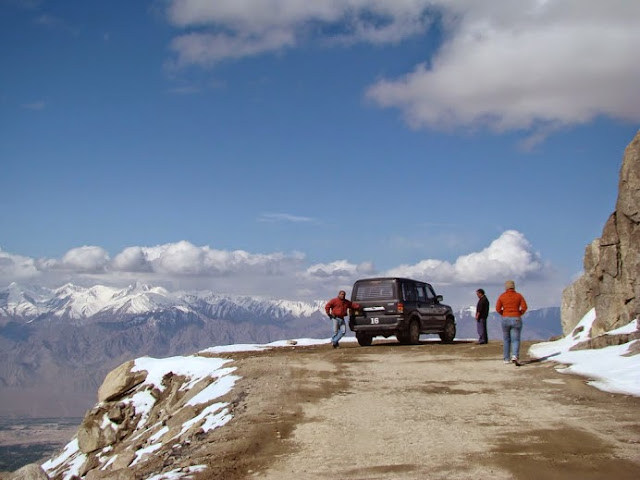 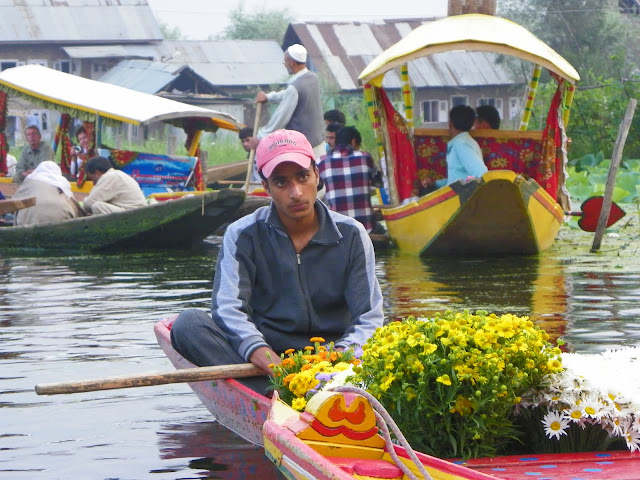 Day 11
Kargil - Drass - Sonamarg – Srinagar (7 – 8 Hrs) by 5.00 am proceeds to Srinagar via Drass. The second coldest inhabited Place in the world. Experience the splendid view of Kargil famous Peaks Tiger Hill and Tololing Peak. At  Vijay Smarak we shall pay homage to the martyrs of the Indian army. Arrive Srinagar by Afternoon.Shikara RideRest day for free to do your own activities. Overnight in Srinagar House Boat


Rates per person on Twin Sharing 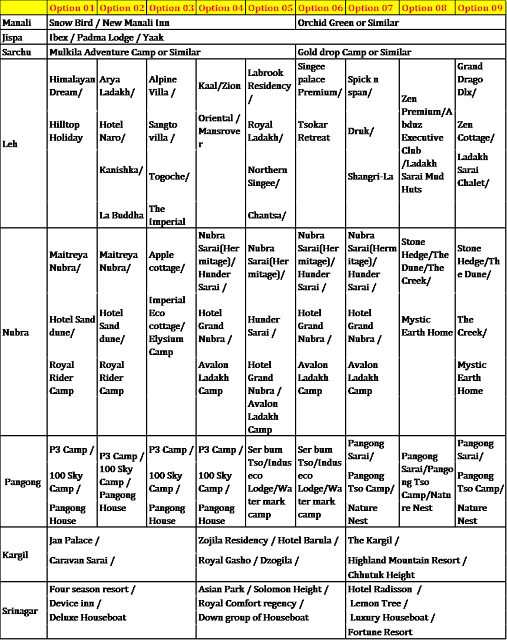