The Seven Islands of the Great City to be...

Story of 7 Islands
Over a period of 5 centuries Bombay, which was one of oldest and best example of fight for human survival in Indian history, has slowly transformed into today’s Mumbai (or Greater Mumbai).
“All things exist in sevens, since it is the nature of the universe to exist in sevens” – Enoch Tan, creator of Mind Reality
7 days in a week, 7 deadly sins, 7 notes in music, 7 colors in a rainbow, 7 states of matter, 7 continents of the World, 7 seas, snow white’s 7 dwarfs so on and so forth…
The story of Mumbai also starts with 7 – The Seven Islands of Bombay.
Once upon a time there was an archipelago of lush green seven islands, dotted with 22 hills at the west coast of India, with the Arabian sea washing through them at high tide. These were the habitat of Kolis, the local indigenous people of western India whose main means of living was fishing.They consisted of Bombay, which was only 24 km long and 4km wide from Dongri to Malabar Hill (at its broadest point) and was the main harbour and nucleus of British fort around which the city grew, Colaba, Old Woman’s Island, Mazagaon, Worli, Parel and Mahim.

The East India Company saw Bombay's potential and leased all the seven islands from the British Crown in 1668 for an annual rent of 10 pounds. The visionary governor, General Aungier, who tool over in 1669, set out to plan the city. The British began building themselves a Fort to live in, docks trade from, and a mint and a printing press to press home their hold over their new properties. All this was, in fact centered on Da Orta's crumbling home, which we resurrected as Bombay Castle.

The British settled themselves in their sea-front Fort, sharing it reluctantly with the more prosperous of the Indian communities, like the Parsis, the Banias and the Bohras. The rest of the incoming Indian communities settled around the bazaar area.

Bombay's fine harbour made it an ideal trading centre and it flourished. Warehouses, counting houses and wharves where Bombay actually lived, and lifeblood was the trade boom, as skilled shipswrights built sturdy vessels of Malabar teak.

Zoroashtrains who fled presecution in Persia in the seventh century, the Parsis, were an enterprising community that fuelled much of Bombay's growth. The Parsi merchant-princes of the 18th and 19th centuries - the Wadias, the Camas, the Jeejeebhoys, the Tatas - not only propelled trade but also endowed Bombay with amenities.


By the 1850s, then, Bombay was a mix of cultures and already distinct from other colonial or traditional Indian urban settlements. This was when the city actually took off. The cotton boom of the mid-1800s spawned the textile industry, with the Bombay spinning and Weaving Company at Tardeo being the first mill to come up in 1854. These mills mushroomed in areas like Tardeo, Lalbaug and West Parel and were run by migrants from the Deccan and the Konkan.

This, in fact was how Bombay was able to cash in on the sudden surge in demand for cotton during the American Cival War, with opening of Suez Canal the trade also got boost with demand from Europe. By 1870s Bombay had become a Manufacturing base from trading hub.

During the last decade of 19th century the city started getting institutionalized building docks like London, setting up Bombay Municipal Corporation, got itself horse drawn tramways, first chamber of commerce and then a stock exchange. The City Gazzetteer records that in December 1864, there were 31 banks, 16 financial associations, 10 shipping companies, 20 insurance companies and 62 joint stock companies in Bombay.

A range of public institutions came up like Telegraph Office (1874), the General Post Office (1872), the Secretariat (1874), The High Court (1878) and the Victoria Terminus (1888). There was a distinct architectural unity of these buildings, making Bombay a prime example of post-industrial urban design.

By the turn of the 19th century, Bombay had expanded exponentially with impressive array of buildings and efficient civil superstructures and a network of transport and communications. It was poised to become the commercial capital of India.

Mumbai is also the film capital of India with over 300 feature films each year. Film stars, Mumbai's night life are also among the popular attractions of the city.

The city also played a major role in the birth of modern India. The first session of the Indian National Congress that spearheaded the Independence movement was held in Mumbai in 1885 and the Quit India movement, which culminated in the ouster of the British, was also launched from there in August 1942.

In independent India, the state of Bombay was divided on basis of language to form Maharashtra and Gujarat. Bombay becoming the obvious choice of capital for Maharashtra.

Over the period the city has grown beyond its capacity to accommodate migrant population that come here to make their fortune. Spilled over the neighboring towns of Navi Mumbai and Thane.

The Reclamation and merging of seven islands.

City authorities also went about systematically reclaiming land from seas and developing it. Under the first project, causeways were developed over small creeks of Umarkhadi and Pydhonie to join Mazagaon to Bombay. The Colaba causeway was completed in 1838 joining Colaba, Old Woman’s Island and nearby small islands to Bombay. In 1870, the hills of Chinchpokli and Byculla area were quarried and thrown into the sea, to fill up the gaps around railway lines and land masses. The Bombay City Improvement trust completed reclamation of a massive 90,000 square yards of land alongside the west coast of Colaba by 1905. Later to accommodate the exponentially growing population major constructions happened in Bombay from 1870 to 1970 which ended with the Backbay Reclamation. 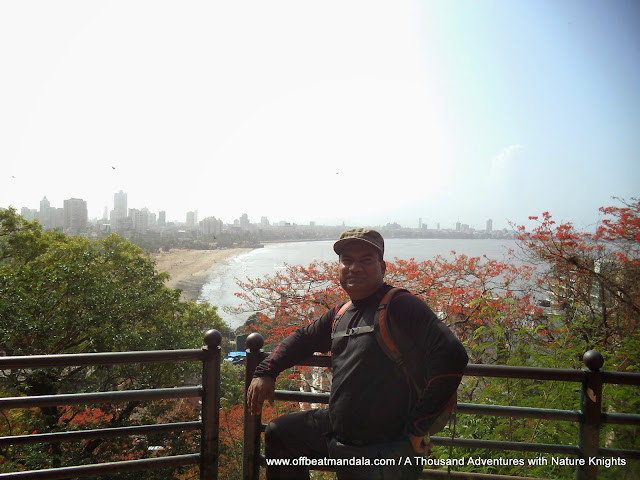 Back Bay (Marine Lines) and Girgaum Chowpatty as spotted from Malabar Hill)
The Supreme Court slowed down the reclamation since 1970 in the interest of protecting the shoreline and fishermen. And the Supreme Court has added more restriction in 1990s with the Coastal Regulatory Zones.
Go back to Exploring - Bombay to Mumbai
Posted by natureknights@gmail.com