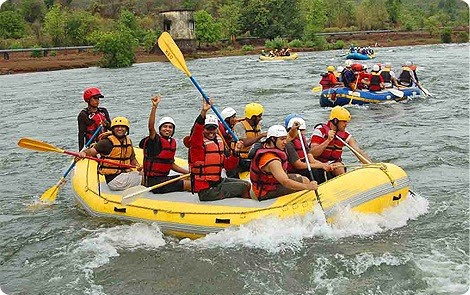 India has many locations where white water rafting adventure sports is gathering popularity by the day. These rivers are located in locations well above 10,000 feet above sea level in the Himalayas to few hundred feet above mean sea level in the Western Ghats of India. The variety varies from high altitude above the tree line Grand Canyon type landscapes of in Ladakh and the every green Conifer forest in Himalayas to Deciduous and Tropical forest and hills in Western plains of India.

Rafting or whitewater rafting is a challenging recreational activity utilizing a raft to navigate a river or other bodies of water. This is usually done on whitewater or different degrees of rough water. 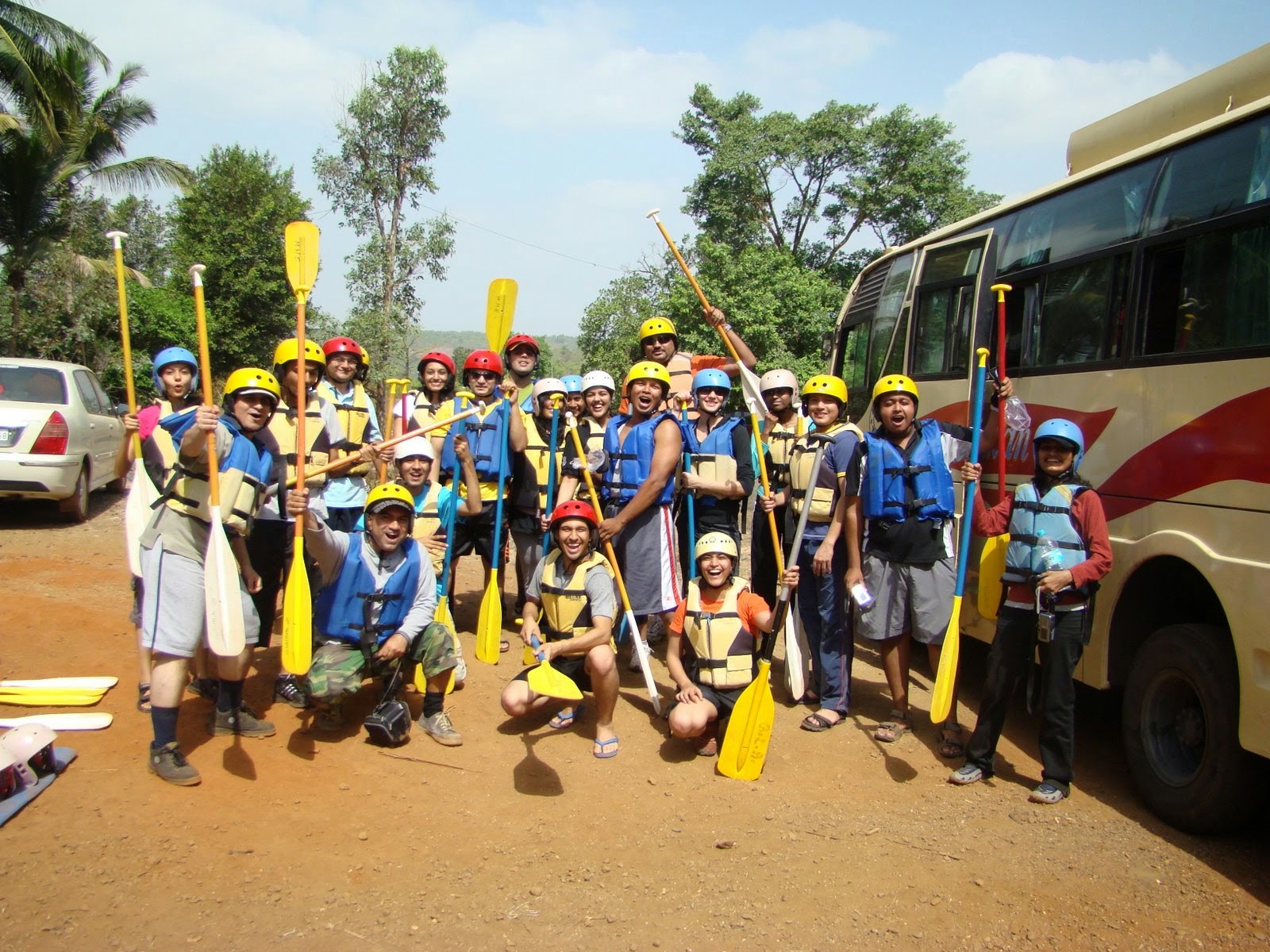 River Rafting Grades: What do the classes mean?

Grades: Mix of 1 to 4
Season: September to June.
The Ganga at Rishikesh is one of the world’s best rivers to raft. A 16 km stretch from Shivpuri to Lakshman Jhula in Rishikesh, rapids range from grade 1 to grade 4. Almost all the camps are located on the river bank, 13 to 22 kms out of Rishikesh town, on the road leading to Devprayag and Badrinath. The rapids in this 70-km stretch from Rishikesh to Devprayag are graded according to difficulty, so you can choose the rapids you wish to encounter according to your level of skill and expertise.
There are as many as 13 rapids with curious names like Return To Sender, Roller Coaster, Three Blind Mice, Double Trouble, Tee Off and Golf Course. An excellent combination of chilled and beautiful white sand river beaches against the scenic Kumaon Mountains, the best season to go there is from September to June. 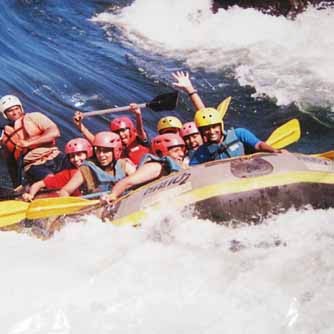 Best Season: July to August
The Zanskar river is one of the major tributaries of the Indus river. Doda river which flows along the main Zanskar valley towards Padum and Kargyag river which flows from Baralach La are the two main branches of Zanskar river. Doda and Kargyag rivers unite in the Zanskar valley forming the Zanskar river. The Zanskar river flows along the large canyon also known as the grand canyon of asia and joins the Indus river near Nimmu in Leh.
Zanskar River is one of the best white water rafting sites in India with rapids ranging up to III and IV along the river.
Rafting is held between Padum and Zimo regions in the Zanskar river gorge at the height of 12000 feet of the sea level. Walls of mountains rise to hundreds of feet on both sides. The rafting route ends as the river merges with the Indus. The route passes through some very rough terrains and remote places in Ladakh. Best time to go is July to August as the river freezes during winters. The Indus River, locally known as the Singhe Khababs (out of Lion’s mouth), flows across the north west to the south east, passing through Ladakh and flows into Pakistan where it joined Shayok and Suru to become major historical Indus River. Landscape around Indus comprises of  deep gorges, towering snow-capped peaks, hilltop monasteries, hillside villages, Ladakh offers a range of rafting options on the Indus and its major tributaries. The rafting season begins in the months of June upto late August on the river Indus when the water levels are high. Tamer in comparison to the more rugged water flow of the river in Nepal, rafting is more commonly done from (Phey to Sasphol) Spitok to the Indus-Zanskar confluence at Nimmu, and from Nimmu to the ancient temple complex at Alchi, graded an average of 2-3. The more challenging route lies between Alchi and Khalsi, which takes in the kilometre long series of rapids at Nurla. 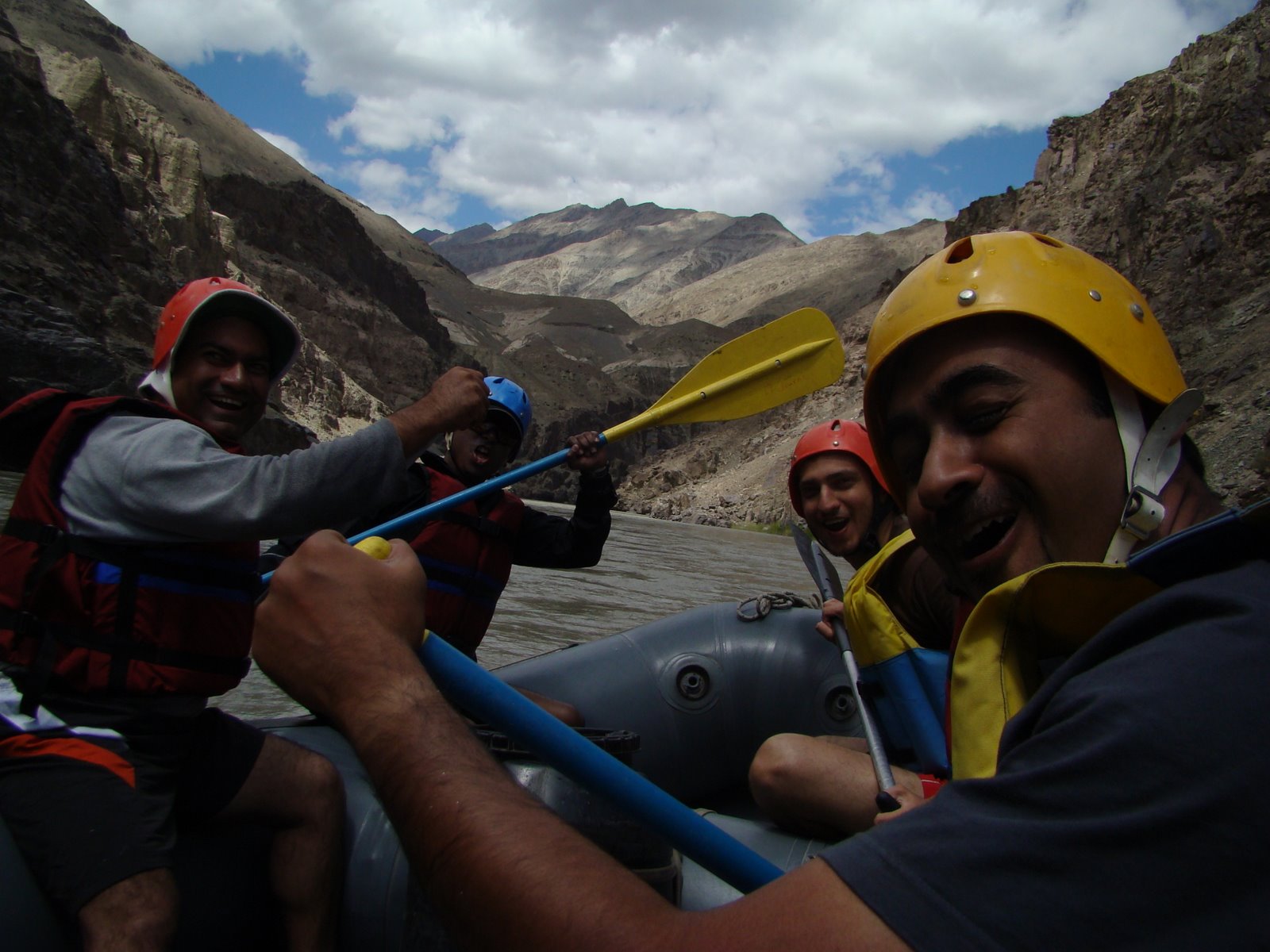 Grade:  Levels 3 and 4
Season: October to Mid-May.
Total Length: 150 KMs.
The source of the Ganges is at the Gangotri glacier whose melting waters form the Bhagirathi river. The Bhagirathi river flows for approximately 320 kms through spectacular scenery until it reaches Devprayag where it merges with the Alaknanda river to become the Ganges.
Gorges, charming villages and white sandy beaches, the Bhagirathi offers 150 kms of pure white water rafting thrill. Rated as a class IV river (demanding), the Bhagirathi river expedition is considered as one of the best river trips in the Indian Himalayas. The raft run is down the lower Bhagirathi gorge and is graded between levels 3 and 4. Rapids like “Elephant rock”, “The Chute”, “Sharp S”, “Confluence rapids” are encountered till Bhagirathi’s confluence with the Alaknanda at Devprayag to form the Ganga. Further ahead are the best rapids of the Ganga, ‘Daniel Dip’ and ‘The Wall’. The best season for a rafting adventure falls between October and mid-May.

Grade: IV
Stretch:
Best Season: October to April
The Teesta River is said to be the lifeline of the Indian state of Sikkim, flowing for almost the entire length of the state and carving out verdant Himalayan temperate and tropical river valleys. The river then forms the border between Sikkim and West Bengal before joining the Brahmaputra as a tributary in Bangladesh. The total length of the river is 309 km. The rugged Teesta River, the main river of Sikkim, Darjeeling, and Kalimpong Hill Region, with a series of rapids with varying intensity, has been rated at Grade 4. The turbulent Rangit, a tributary of the Teesta, with its multi-dimensional rapids, it offers a challenge to more experienced rafters. In Teesta rafting is confined to the winter months, between October and April. Spring or early summer is ideal for river rafting. Paddle rafting and oar rafting can be done in the Teesta River.

Grade: IV
Stretch: 180 KMS
Best Season: November to March.
Both mystifying and ferocious, the river finds its way down from the Tibet region by cutting Greater Himalayas and then enters Arunachal Pradesh from where the expedition initiates. A week long run in the river of Brahamputra takes the rafters through remote hill sides with a few tribal settlements in thick rainforests. The expedition starts from Tuting in Arunachal Pradesh on the Subansari river, the primary tributary of the Brahmaputra, and ends after 180 kms of rafting at Pasighat.  The trip also gives an excellent exposure to remarkable sceneries and unparalleled locations making this river’s white water rafting amongst premier expedition in India.
The rafting is rated at Level IV. What makes it doubly interesting is the area has virgin beauty, Arunachal Pradesh being closed for tourism until recent days. The best rafting season for Bramhaputra is November to March.

Best Season: May to June or September to November.
Kali (also known as Sharda) in India while Mahakali in Nepal, originates in the Pithorgarh district of Uttarakhand. It is located along the border of India and Nepal; and forms a natural eastern boundary between India and Nepal.
The Mahakali River trip is an exciting river journey along scenic terraced cultivation of the quaint and remote Kumaoni villages, coupled with sparkling water and wonderful sandy beaches. Even the drive is quite adventurous and picturesque which takes us through many important towns of Kumaon. This trip promises a wilderness journey of a lifetime with view of various wild animals, and birds, while rafting through the pristine, and deserted environment. Put-in point for rafting varies according to the season, starting at Jauljibi / Jhulaghat for pre-snowmelt season (March / April) and Pancheswar for post-snowmelt season (May / June or Mid-Sept / Oct / Nov).
Pancheswar is also a famous fishing site for the mighty Mahseer and a rafting expedition could be combined with an angling trip.

Grade: III, IV and V
Garhwal, the part of Uttarakhand that borders Himachal Pradesh is the home of the river Tons. Rising from the Bandarpunchh Mountain range at 20,720 ft., the river is the biggest Yamuna tributary and is believed to have more water than the Yamuna itself. The Tons river expedition provides you the thrill of running a river that have grade 3-4 and even some grade 5 rapids. It is considered to be one of the most challenging white-water rivers to run in the country and has a lot of adventure to offer.
It is considered as one of the most challenging white water river rafting expeditions in the country today.
The Tons Valley is a remote area and has a culture unlike any other in the region. The villagers in the Tons valley are believed to be descendents of the Pandavas and Kauravas from the epic Mahabharata. It also has some uncommon traditions such as that of polygamy.

Grade: II, III
Run: 14 Kilometers.
Season: Round the Year (But best experience Monsoon  July to September).
Kundalika, the fastest river of the South, at Kolad, is an excellent rafting destination South of the Himalayas. Situated amidst the magnificent Sahyadris, the almost 14-kilometre stretch of rapids along this river provides ample opportunities for an exciting experience. Rapids range between Class II & III. The best months for rafting are in the months of monsoon when the water levels are high.

Grade: 2 to 4.
Best Season: June to September.
River Barapole in Coorg, Dakshina Kannada, specially the upper river, provides excellent rafting opportunities. Situated in the Western Ghats edging along the Deccan Plateau, the grades range between 2 and 4.There are approximately 4 to 5 rapids in the regular upper section & about 6 to 7 rapids in the lower section, these rapids depending on water levels are between grade 2 to 3 or 4. The best season to raft is in the monsoon and post-monsoon months of June to September.
Dandeli is yet another popular white water rafting spot in Karnataka that offers both long and short runs along the river.


You may also want to explore some of our other links given below:


Few camping options in Maharashtra
Custom Treks in Maharashtra
Our Corporate Services​
Team Building Program
Some of our credentials
Adventure Hobbies - Know more
Our upcoming events, trips and treks
​Why us