Our local host is a young and dynamic local Nagaland enthusiast with wide variety of expertise in leading and facilitating tour across Nagaland. Our main objective is to promote sustainable tourism through innovative ideas and means, involving the rural population for a better livelihood. Our local team specializes in individual as well as group tours to rural destinations at a reasonable expense. Our tour activities in Nagaland include sightseeing, trekking, cultural & historical tours, nature adventures, bird watching, butterfly identification, wildlife tours, etc. We believe that this method of tourism will generate benefit for all the stake holders. We also believe that it will help solve various social problems while preserving the precious natural and man-made resources which the human prosperity is based upon.

About Nagaland
Nagaland, a North-Eastern state in India, with its vibrant traditions, is a land of festivals in the midst of nature at its best. It is bounded by Myanmar, and the states of Assam, Arunachal Pradesh and Manipur. The state covers an area of 16, 527 sqKm with a population over 19 lakhs. The literacy rate is 67.11%. Nagas are brave, strong, open minded, warm and hospitable, they can immediately make you feel like home.  Nagaland has 16 different tribes, each of which has their distinct customs, dialects, festivals, attires and traditions. 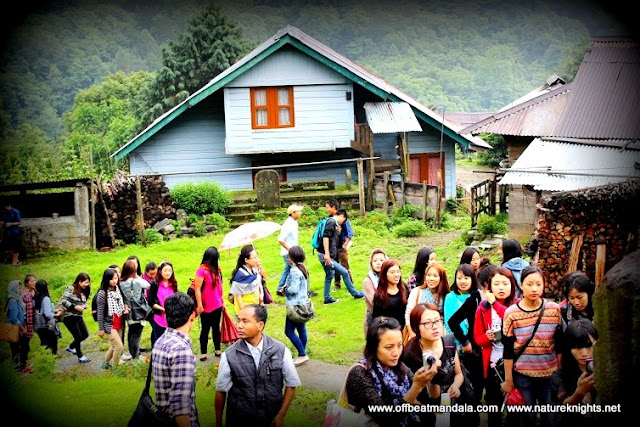 Nagaland is mainly hilly with deep forests which make it most suitable for sightseeing, trekking, exploring etc. Be it the skulls hanging from houses, the Rhododendrons, the Orchids or the rare Blythe’s Tragopan, one can get to see them all. During the winter season, there is snowfall in some parts of the state. The unique Dzukou valley must be seen with the naked eye to realize its unique vegetation and beauty. In short, Nagaland is the perfect getaway for reinvigorating your life the natural style. Between January and March, one can get to observe the Naga wrestling, the true indigenous sport of the Nagas. Previously a land of headhunters, Nagaland is today a Christian majority state. Visit Nagaland to experience the warmth and hospitality of the head hunters. 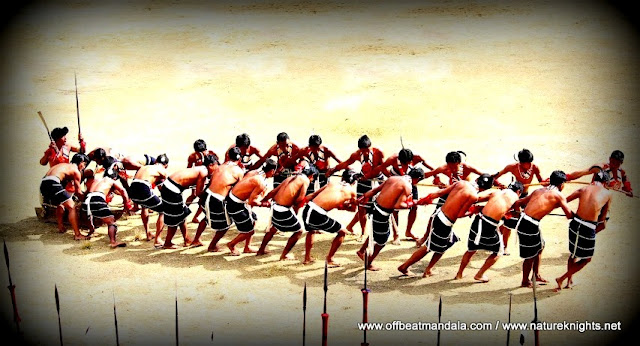 Get in touch with us for Custom Tours, Treks and Experiences.

General Information
English is the most common language used in Nagaland besides Nagamese, while the local dialects are used to a lesser extent. According to the Govt. of Nagaland, Domestic tourists are required to obtain the Inner Line Permit (ILP). Our local host team offer's assistance to our touring customers in obtaining the above permit.

Access:
Dimapur is the only airport in Nagaland, which is 75 km from Kohima. There are flights from Delhi, Kolkata, and Guwahati. The main railhead is also at Dimapur and is connected by the Northeast Frontier Railway to the other parts of the country. Besides other trains, Rajdhani and Jan Shatabdi are also available. All towns and important villages in the state are connected by Government run State Road Transport. Private transports are also available, taxis are available for hire at every place. One can also connect to Nagaland from Dibrugarh and Imphal (Manipur) which has flights from Delhi, Guwahati and Kolkata.

Bird watching
Nagaland with its rich biodiversity is in abundance of flora and fauna. A perfect place to spot and watch species of birds least 500 species of birds in Nagaland. Top of the list of birds in Nagaland is the Blyth's Tragopan - the State bird. It is fiercely protected in most places that it occurs. Other key birds include three regional endemics - the Striped Laughingthrush Garrulax virgatus, the Brown-capped Laughingthrush Garrulax austeni and the (Cachar) Wedge-billed Wren Babbler Sphenocichla humei roberti and specialties like the Spot-breasted Parrotbill, (Naga) Long-tailed Wren Babbler, Tawny-breasted Wren Babbler, Chestnut-vented Nuthatch, Dark-rumped Swift and Rufous-capped Fulvetta.

Butterfly adventure
Nagaland, with its rich biodiversity, is home to multitudes of butterfly species. Still highly unexplored, it serves as a perfect place for butterfly enthusiasts. Our staffs also consist of a butterfly specialist, who will assist throughout the tour. There are hotspots for butterfly identification all over the state, which we will take one to the hot spot areas in Nagaland

Eco-Trek to Mount Saramati
Saramati Peak is the highest mountain Peak in Nagaland located at Kiphire district, Nagaland State, India and Burma border, with the height of 3,826 m and a prominence of 2,885 m. The climb reveals verdant forest that give way to gravel and rock. It has good bio-diversity with natural flora and fauna. Orchids of its own unique types are found. December to February is being considered as the best timing for trekking, campaign and photography as nature turns its best during these months.

Eco-Trek to Mount Japfii
Japfü Peak in Nagaland is the second highest Peak in Nagaland, with 3,048 meters above sea level. For trekkers, October - March can be recommended as the most appropriate season. One interesting and famous reason for tourist attraction is the Blythe Rhododendron tree, which marked its name in the Guinness Book of world record is habitat in this mountain range a little minutes walk from the Peak. Its vegetation is sub-tropical with broad leaf on the slopes and moderate broad leaves on higher altitude.

Eco Trek to Mount Kapamodzü range
Standing majestically at the height of 2620 feet, Kapamodzü peak is in the top five highest peaks in Nagaland. A perfect destination for rock climbers and adventurers, this peak is a treat to any visitor. Up there, it gives a bird-eye view of Zhavame village, Saramati peak, Japfü, Kohima and many neighboring villages of Manipur and Nagaland and places as far as Himalaya range on a clear morning. It is one of the most sought places for picnic, outing and trekkers. Kapamodzü range is a reserved forest and once up there we find deep forest with centuries old trees and varieties of cane, it is also nature’s best garden with Rhododendron, wild trumpet flower, wild rose, ferns, holly flower, wild orchids, medicinal plants and best Zoo with deer.

Eco-Trek to Dziikou valley- Khonoma Sanctuary waterfal
Dzükou, described as “Nature’s Utopia” is a home of eternal charm that has an irresistible appeal to all who behold it. It forms the ecological core of the biodiversity rich Barail Ranges. Its emerald green rolling hill cantons sprinkled by gentle flowing streams are a trekker’s delight. It is surrounded by high mountain ranges including Japfü peak, the second highest peak in Nagaland. It can be approached through rough trekking. The roundabout streams that flow leisurely through Dzükou freeze during extreme winter and their banks remain covered with wild shrubs during the summer. Lilies in white and pink, rhododendrons of different colors and other species of flowers and plants in varied colors adorn Dzükou in monsoon. Dzükou is known for its biodiversity, and the predominant plant is the tough bamboo brush because of which Dzükou looks like a fully manned lawn from afar.

Adventure trek from Khonoma Green Village to Benreu
Khonoma Green Village, the birth place of A.Z Phizo, the father of the Naga Nationalist Movement is located 20 km west of the state capital Kohima.  Khonoma is a history rich village of the Angami Naga tribe known for its fierce resistance against British dominance during the colonial period. It was here that the Naga intruders made their last stand against the British in 1879. It is bounded with beautifully created systematic topography, the houses, each of which foundation is built stones, in the hilltops and terraces carved out of its hilly slopes. Sustainable Alder Tree Management and organic vegetation is practiced. Rich in culture and tradition, the community initiated Khonoma Nature Conservation and Tragopan Sanctuary Trust (KNCTS Trust) conserve and preserve the rare Blythe’s Tragopan, besides a huge variety of rare species of plants and animals within its conserved area. One of the cleanest villages in the entire Asian subcontinent, a model village for eco-tourism and is almost a virgin territory for animal watchers, bird watchers, trekkers and botanists for the whole area to explore and discover.

Benreu
Situated in the district of Peren, Benreu is a tourist village preserved around the ethnic-tourism concept, it is a living showcase of the endangered culture of the highlanders and with a dense wildlife sanctuary around it, the visitor can truly embark upon his wild safari by staying comfortably and contentedly in this real animist village. KennieNku, the local bread made from sticky rice and prepared over a heated stone kiln is the specialty one should not miss while in the village.

Agro tours
Enjoying the view of lush terrace rice fields gliding down the slopes is a gateway to heaven or an extraordinary fresh organic cabbage field spreading to hectares of land, pleasant view of a village surrounded by the full bloom of plum, peach and cherry, oranges gracefully ripped in the orchard. The experience to climbing a tree, cultivating fresh vegetables, milking cows for your breakfast, or harvesting bountiful paddy rice itself are unique experiences which very few in this world has to offer. These experiences are a unique and unmatched, tucked away from the outside world and a blessing in disguise. Terrace rice cultivation and jhum cultivation are the two main agricultural practices in Nagaland. Ever imagine how interesting it will be to stay in the farm and have a firsthand experience? For everyone, ye its best resourceful for agro students, Academicians, researchers, Agri department officials and tourists with interest in agro and village life.

Hornbill festival tour
The Hornbill festival is celebrated each year from December 1-10 at Kisama Heritage Village, 10 km away from the state capital of Nagaland-Kohima. This festival acts as a window to Nagaland where all the tribes participate in showcasing their unique and rich culture to the world. An ethnic wooden craft 'Naga Traditional Welcome Gate' with traditional fineries of the Naga tribes welcomes visitors to the Naga Heritage village. Of the exhibits Naga morungs or traditional huts of different tribes made with bamboo and cane and decorated with wood carvings and hunting trophies are spectacular. During the festival, Naga tribes perform traditional dances and music, along with indigenous games and sports, including wrestling. The festival aims to revive and protect the rich culture of Nagaland and showcase its ethnic customs and traditions to the world. Besides the traditional extravaganza, events include Hornbill International Rock Contest (HIRC), Hornbill International Musical Festival, North East Cultural Day, Hornbill Charity Concert-cum-Ball, Hornbill Master Chef Competition, Hornbill Snooker Championship, Hornbill National Dance Competition, Miss Nagaland Contest, Hornbill Annual Cycle Rally, Kids Carnival, 'Glocal' Film Fest, Vintage World War II Motor Rally, International Car Rally and many other competitions. Over 25 bands including bands from the US, UK, Norway, South Korea, Thailand and Indonesia take part in the Hornbill International Rock Contest (HIRC) held for 4 days at the Naga Solidarity Park during the festival.
Posted by Nature Knights