Backpacking in the Gods Own Country.. 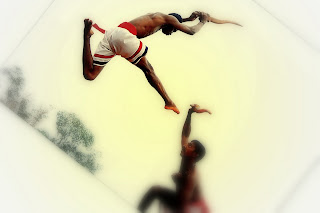 
Budget will be announced shortly a day plus Train Travel Cost.


Other Tours /  The Place / Packages / Backpacking

Camp Fee will include:

Stay and Food on Triple Sharing with Breakfast.
Train Cost will be extra on actual
Other local travel and food will be on actual

The Place (Gods Own Country)

Kochi
Kochi, better known as Cochin, is Kerala's most cosmopolitan city. Kochi have an old charm, with their blend of Dutch, Portuguese and English bungalows and quaint narrow streets. The scenic location of Kochi's natural harbor, surrounded by palm groves, green fields, inland lakes and backwaters, has enchanted visitors from across the globe for centuries.

Munnar
Nestled among the mist clad mountains serene evergreen forest of Western Ghats of Kerala is the confluence of three rivers - Munnar. She is really a jewel in the crown in Kerala. The blanket of emerald green tea plantations, the placed lakes, all give the natures very best. The spicy fragrance of the wind, virgin beauty of the wooded valleys and seductive landscape makes her a lover's paradise.

Thekkady
Thekkady is one of the most popular wildlife sanctuary of the country and is also India's Southern most Tiger Reserve. The sanctuary is well known for Viewing all aspects of elephants. It is a heaven for Sambar, wild bear, spotted deer, leopard, Malabar flying squirrel, tripe necked mongoose, black nilgiri langoors and nilgiri Thar etc.

Vallamkali or the Snake Boat Race is the most enchanting facet of the festival of Onam. The event is promoted as a major tourist attraction of the state of Kerala and draws a large number of domestic and international tourists. Vallamkali has been going on for good number of years and its popularity is soaring with each passing year. Much credit for the success of Snake Boat Race can be attributed to Pandit Jawahar Lal Nehru who was so enamoured by this colourful event that he instituted a trophy for the race.

There is also an interesting legend behind this very electrifying event. The story goes that once about 10 kilometers up the river Pamba from Aranmulla, the head of the Katoor Mana, a Nambudiri family, offered his daily prayers and was waiting to feed a poor man to complete the ritual. After waiting for long, Brahmin closed his eyes and started praying to Lord Krishna. As soon as he opened his eyes, he saw a ragged boy standing before him. The Brahmin lovingly gave a bath to the boy, a new set of clothes and also a sumptuous meal.

To the utter surprise of the Brahmin, the boy vanished after having the meal. He searched for the boy and spotted him at the Aranmulla Temple but the boy disappeared again. Namboodari concluded that it was no ordinary boy, but God himself. To commemorate the event, he began to bring food to the Aranmulla temple every year during the time of Onam. And, to protect the food from the river pirates, Kovilans or snake boats used to accompany the entourage.

As the tradition gained popularity, the number of snake boats increased leading to the custom of a grand carnival called Snake Boat Race. 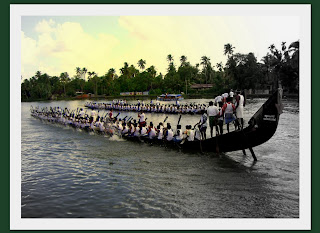 Vallamkali boat are no ordinary boats and there are fixed measurements to it. It is about 100 feet long and has a seating capacity of 150 men. The boats are usually made of anjili (Artocarpus hirsuta), though sometimes teak and kadamb (Naucleacadamba) wood is also used. The curled ends of the boats are shaped like cobra hoods and it is from this shape that boat has derived its name. Each boat is meticulously crafted by skilled craftsmen and a lot of patience and hard work goes into making and decorating it. The boat is treated as a deity and a holds a lot of emotional value for the village folk. Only men are allowed to touch the boat that too with bare feet. Each boat belong to individual villages located near the river Pamba.

Vallamkalis are tastefully decorated with green and scarlet silk umbrellas. The number of umbrellas attached to a boat holds significance as it signifies the affluence of the family to which they belong. To render a more maginificient look to the boat gold coins, ornaments and tassels are also added.

Great care is also taken for the upkeep of the boat. A carpenter repairs the boat on an annual basis. The boats are lubricated with fish oil, coconut shell and carbon mixed with eggs. This also helps to keep the wood strong and boats slippery in water. This way one can always find a boat ready for a swim.

Preparation for the Boat Race

To make sure that everything goes smooth, arrangements start days before the event. The boats are launched a day before the grand race. Pujas are also rendered to Lord Vishnu and Mahabali by a priest to invoke blessings for the boat and the boatmen. Flowers offered to the God are also placed at the helm of the boat as a good luck charm.

To watch the grand gala race, thousands of people assemble on the banks of the river Pamba at Aranmulla where a temple dedicated to Lord Krishna and Arjuna is located. About 30 elaborately crafted Chundan Vallams or snake boats participate in the mega event.

The boat race is conducted on a stretch of 40 kilometers from the hills to the low lying plains on the fifth day of Onam. The sight becomes endearing when one looks at the beautifully decorated boats being rowed by oarsmen dressed in white dhotis and turbans. Traditional songs Vanchipattu, sung on the rhythm produced by splashing of boats furthers adds to the overall excitement of the team event.

Each boat comprises of 150 men of which four are helsmen, 25 men are singers and 125 are the actual oarsmen.

The most remarkable feature of the Snake Boat Race is the depiction of the great team spirit. It also displays the importance of being united and to be in harmony with nature. A single mistake by one person can produce imbalance and could lead to the overturning of the boat.

These day even women participate with lot of enthusiasm in the event and a separate race is conducted for them.

Another tradition of the Onam is that all through the festival days to the eve of Thiru Onam, a boat laden with food, called Palliodam sails from Katoormana. This tradition owes its origin to a legend when a food laden boat got stuck in a turn of river. It could be maneuvered further only when a famished family living in a hut on the banks of the river was well fed with the food in the boat.

This is related to the Snake Boat Race as the winning boat gets the privilege to accompany Palliodam. The sight is wonderful to look at as the boats are lit with lamps and could be spotted from far. The colorful boat festival is held on the fifth day after Thiru Onam.

Other Tours /  The Place / Packages / Backpacking


Kalaripayattu is the oldest existing martial art form, dating back more than 2000 years and said to be the forerunner of popularly known Chinese martial arts, as the Buddhist monk Bodhidharma took this knowledge from India to China.


The practice of Kalaripayattu is said to originate from the Dhanur Vedic texts encompassing all fighting arts and described by the Vishnu Purana as one of the eighteen traditional branches of knowledge. Kalaris are the schools where training in this martial art form is imparted by Gurukals or masters.

This martial art form is indigenous to the Southern Indian state of Kerala which, legend has it,
was created by the warrior saint Parasurama, an incarnation of Lord Vishnu, by throwing his axe into the sea which receded till the point where it fell. Parasurama then established forty-two kalaris and taught twenty-one masters of these kalaris to protect the land he created.
Kalaripayattu is a traditional psycho-physiological discipline emanating from Kerala's unique mytho-historical heritage as well as a scientific system of physical culture training. The historical antecedents of this martial art form combines indigenous Dravidian systems of martial practice such as 'varma ati' or 'marma adi' with an influence of Aryan brahman culture which migrated southwards down the west coast of India into Kerala. There are two distinct traditions in Kalaripayattu-the Northern and the Southern schools.

In the Northern tradition the emphasis is laid on progressing from body exercises to combat with weapons and last of all to unarmed combat. In the Southern tradition the patron saint of Kalaripayattu is the sage Agastya whose strength and and powers of meditation are legendary. It is said that when the Lord Shiva married the Goddess Parvati at Kailasa in the North, all gods and goddesses went to attend the wedding and with this shift in weight the world tilted, so much so, that Agastya was sent to the South to restore the balance.

Other Tours /  The Place / Packages / Backpacking
Posted by natureknights@gmail.com