A trip that takes you back to few centuries, few millenniums,  we travel back in time to a period beyond 50,000 years.


Admire the marvel of art, an entire way of life, art of war, experience the unique creation on nature.. and great company.. only with Nature Knights.. 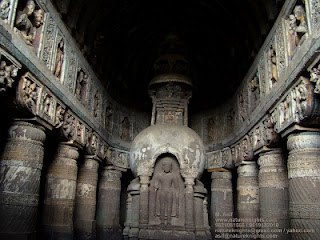 
Aug 18 (Board Bus at Night for Aurangabad)


Ajanta
The caves date back from 200 BC to AD 650. The caves were forgotten years until 1819 when it was discovered by a British hunting party. There are around 30 caves at Ajanta most of them cut across right in the centre of a horse shoe shaped hill. The oldest caves are towards the centre. 5 caves are Chaityas (Prayer Halls) & 25 are Viharas (Residence). Out of 30 caves only 1 to 26 caves can be visited. In Ajanta, Hinayan and Mahayan have their separate caves. There was no idol worship in Hinayan sect. Only emblems represented Buddha. In Mahayan, idol worship was prevalent. Caves 1, 2, 16 and 17 are famous for coloured wall paintings. Caves 9, 10, 19 and 16 are Chaitya Griha. 9 & 10 belong to Hinayana. The rest of the caves are Viharas. It is belived that Siddharth (Buddha) as Bodhisattva had passed through several rebirths before he attained the highest position called Buddha. All the stories related to his past are called Jatak Katha.


Ellora is an archaeological site, 30 km  from the city of Aurangabad in the Indian state of Maharashtra built by the Rashtrakuta rulers. Well-known for its monumental caves, Ellora is a World Heritage Site. Ellora represents the epitome of Indian rock-cut architecture. The 34 "caves" – actually structures excavated out of the vertical face of the Charanandri hills – being Buddhist, Hindu and Jain rock-cut temples and monasteries, were built between the 5th century and 10th century. The 12 Buddhist (caves 1–12), 17 Hindu (caves 13–29) and 5 Jain (caves 30–34) caves, built in proximity, demonstrate the religious harmony prevalent during this period of Indian history.


The Yadavas were initially ruling under the Chalukyas of Kalyani over region of modern Dhulia and Nasik districts with their capital at Chandradityapura (modern Chandor, Nasik district). Bhillama V who was one of the powerful Yadava rulers led victorious campaigns against the Hoysalas, Paramaras and Chalukyas founded the city of Deogiri and shifted his capital here. Since then the succeeding Yadava rulers held their capital here. During the rule of Ramachandradeva, son of Krishna, Ala-ud-din Khilji invaded and captured Deogiri in A.D. 1296. However, Ramachandradeva was allowed to rule from here as a vassal. Later, Malik Kafur led two campaigns against Ramachandradeva and his son Shankardeva in A.D. 1306-07 and 1312 respectively; Shankardeva was killed during the latter campaign. Harapaladeva was placed on the throne by Malik Kafur who later ascertained his independence. This led to another successful campaign against Deogiri by Qutb-ud-din Mubarak Shah Khilji and the fort was annexed to the Delhi Sultanate. Muhammad-bin-Tughluq succeeded the Khiljis at Delhi and he renamed Deogiri as Daulatabad and seeing its impregnable fort, shifted the capital from Delhi in A.D. 1328. This led to serious repercussions and he had to again transfer the capital back to Delhi. The region and the fort passed on into the hands of Bahamani rulers under Hasan Gangu in A.D. 1347 and Nizam Shahis of Ahmednagar in A.D. 1499. Daulatabad became the capital of Nizam Shah dynasty in 1607 A.D. Deccan witnessed turbulent periods due to the frequent invasions and infights between the local ruling families during this period. The Mughals led several campaigns during the rule of Akbar and Shah Jahan and only during the latter’s period the area was fully captured in 1633 A.D. after a long siege of four months. Thus the Mughals seized power and Aurangazeb was placed as the Viceroy of Deccan who led his campaigns to Bijapur and Golconda from Daulatabad. The rising power of Marathas troubled the Mughals and for a brief period the region passed under the control of Marathas. Thus the Daulatabad fort passed several hands, captured and re-captured, by the Mughals, the Marathas, the Peshwas, and finally placed under the control of the Nizams of Hyderabad in 1724 A.D. which was under their control till independence.


Bibi-Ka-Maqbara
The Bibi-Ka-Maqbara is a beautiful mausoleum of Rabia-ul-Daurani (Dilras Banu Begum), the wife of the Mughal Emperor Aurangazeb (1658-1707 A.D.). This mausoleum is believed to be constructed by Prince Azam Shah in memory of his mother between 1651 and 1661 A.D. An inscription found on the main entrance door mentions that this mausoleum was designed and erected by Ata-ullah, an architect and Hanspat Rai, an engineer respectively. The marble for this mausoleum was brought from mines near Jaipur. According to Tavernier, around three hundred carts laden with marbles, drawn by at least 12 oxen were seen by him during his journey from Surat to Golconda. The mausoleum draws its inspiration from the world famous Taj Mahal of Agra (constructed between 1631 and 1648 A.D.) and hence it is rightly known as the "Taj of Deccan". The mausoleum was intended to rival the Taj Mahal, but, the decline in architecture and proportions of the structure had resulted in a poor copy of the latter. Even this decline cannot stop one appreciating the setting of the tomb complex in a garden setting with the mountain ranges behind providing as a backdrop. A huge ‘U’ shaped gap in between the hills behind provides the perfect harmony in which the mausoleum is blended.
According to the "Tawarikh Namah" of Ghulam Mustafa, the cost of construction of the mausoleum was Rs. 6,68,203-7 (Rupees Six Lakh, Sixty Eight Thousand, Two Hundred and Three & Seven Annas) in 1651-1661 A.D.
Chatrapati Shivaji Maharaj Museum


The Aurangabad Municipal Corporation has established Chatrapati Shivaji Maharaj Museum near Nehru Bal Udyan. The Project is of worth Rs.194.00 Lacks. The Museum has got 6 Exhibition Halls. It is expected that the tourists and students get inspiration from the events depicted in pictorial and model forms. The first hall is decorated with the wooden craft which reminds us the glorious past. The second hall is full of sword shields and ancient rifles. In the next hall photographs and transparencies of forts like Torana, Lohagarh, Panhalgarh, Singhgarh. One can see the advanced architectural beauty of the forts. The fourth Hall consists of vessels used by the people contemporary to the great King Shivaji Maharaj. The separate space provided for the exhibition of coins. These coins are rare. The coins were used by Satwahan Dynasty. The resident of Aurangabad Dr. Shantila.
About Lonar
The Lonar crater is the world's only salt water lake in basaltic rock, believed to have been caused by a meteorite hitting Earth around 52,000 years ago. It is surrounded by forests with a large variety of birds, particularly peacocks, owls, red-wattled Lapwings and ducks. In the lonar sarovar there are number of medicinal and aromatic plants observed. Ph of water is 11. Kamalja mata mandir is situated in the sarovar which is 3 km away from the Rest house.
Lonar Lake has a mean diameter of 1.2 kilometres (3,900 ft) and is about 137 metres (449 ft) below the crater rim. The meteor crater rim is about 1.8 kilometres (5,900 ft) in diameter. The circular depression bears a saline water lake in its central portion. 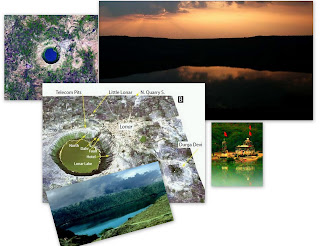