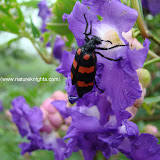 Insects (Class Insecta) are a major group of arthropods and the most diverse group of animals on the Earth, with over a million described species— (90% of the differing life forms) Insects may be found in nearly all environments. There are approx: 2,000 praying mantis 5,000 dragonfly species 20,000 grasshopper 82,000 true bug 120,000 fly 110,000 bee wasp & ant 170,000 butterfly & moth 360,000 beetle species Adult modern insects range in size from a 0.139 mm (0.00547 in) fairyfly to a 55.5 cm (21.9 in) long stick insect. The heaviest documented insect was a Giant Weta of 70 g (2½ oz), but other possible candidates include the Goliath beetles Goliathus goliatus, Goliathus regius and Cerambycid beetles such as Titanus giganteus, though no one is certain which is truly the heaviest. The study of insects (from Latin insectus, meaning "cut into sections") is called entomology, from the Greek εντομον, also meaning "cut into sections".