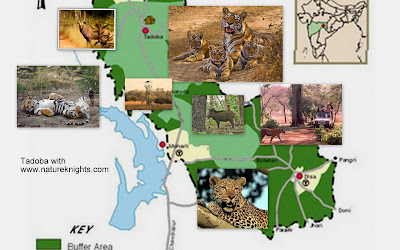 Best Season: November to Mid March (for good climate)
Best Season for Wild life: Apri and May (But it would be very hot in this season)
Open round the year.

Includes Food, Stay, and Safaris. For group size 6 and above also includes transport Nagpur to Tadoba.

Call in person for Group discount.
Schedule: (We can customise schedule to suite your requirement).

About Tadoba
My most memorable moments at Tadoba besides spotting Tigers and hearing their loud roars during night safari, were the sign board near Tadoba Lake. It had a picture of a man caught in crocodiles jaws trying and trying to get out, the caption said, "Swimming in Lake Prohibited, Survivors will be prosecuted".
Tadoba-Andhari Tiger Reserve is a tiger reserve in Chandrapur District, Maharashtra, India. It includes Tadoba National Park and Andhari Wildlife Sanctuary. Maharashtra's oldest National Park created in 1955, the Tadoba Andhari Tiger Reserve. It is also one of India's 28 Project Tiger Reserve. The National Park is 623 km² in area, consisting of two forested rectangles of the Tadoba and Andhari range. Along with around 50 tigers, Tadoba Tiger Reserve is a home for rare Indian wildlife such as Leopards, Sloth Bears, Gaur, Nilgai, Wild Dogs, Hyenas, Civet and Jungle cats, and three species of Indian deer - Sambar, Cheetal and Barking Deer. The Tadoba lake sustains the Marsh Crocodile, which were once common all over Maharashtra. Tadoba is also an ornithologist's paradise with a varied diversity of aquatic birdlife, and Raptors. Thickly clad hills form the north and western boundary of the Tiger Reserve. To the southwest is a huge lake, which acts as buffer in between the Park Forest and the extensive farmland extending right up to the Irai Lake. Tadoba Tiger Reserve is open throughout the year. The park remains closed every Tuesday.
Tadoba Andhari Tiger Project is one of the best known Tiger reserves in India. Tadoba was established in 1935 and declared a National Park in 1955. Andhari Wildlife Sanctuary was notified in 1986, and in 1995, both the park and the sanctuary were merged to establish the present Tiger Reserve.
Tadoba National Park and Wildlife Sanctuary at Andhari together form the Tadoba-Andhari Tiger Reserve. The park derives its name from "Taru" the local deity, whereas the Andhari River that meanders through the forest gives sanctuary its name.
This park is a marvellous place to visit for the wildlife enthusiasts. Park has a rich collection of various kinds of Flora and Fauna. A lake inside the park is one of the major attractions here.
The unspoiled reserve houses a number of wildlife species, including 195 species of birds. The forest is dotted with innumerable waterholes.
The reserve also shelters over 70 species of spiders and butterflies.
There are around 40 tigers wandering in this Tiger reserve. Tadhoba is a southern tropical dry deciduous forest of Deccan Peninsula that comprises teak forests with bamboo thickets
Tadoba reserve covers the Chimur Hills, and the Andhari sanctuary covers Moharli and Kolsa ranges. It's bounded on the northern and the western side by densely forested hills. The two forested rectangles are formed of Tadoba and Andhari range. The south part of the park is less hilly, and on the south-west side, it's flanked by Tadoba Lake. The lake offers a perfect habitat for crocodiles to thrive.Note: Commercials subject to change depending upon season, size of your group and customisation of trip.
Posted by natureknights@gmail.com