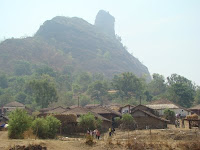 The history of Kotligad fort can be traced back to till 13th century. The cave and the temple carvings at the entrance of the Kotligad fort date back to the 13th century. Not much is known about the history until the 18th cent. In 1716, this cave was captured by the British. Then later on, on November 2, 1817, it was taken by the Marathas under the leadership of Bapurao who belonged to the second generation of Bajirao. It was recaptured by the British, on December 30, 1817, the very next month, under one Captain Brooks. The British had the fort till 1862; it served as an outpost for keeping vigilance on the surrounding valley and the hills all around it. Basically it's the only big peak in the middle of a big valley surrounded by many hills, which made it strategically important as a watch post.

How to reach Peth?

Taking public transport, board an early morning train for Karjat and board a bus for Kaashele or hire a dug-duggi (Big Rickshaw) that takes you directly to Ambiwali Village. The base village is Ambiwali, which is about 10km from Kaashele towards the east. Ambiwali is not on the main Karjat-Khaandas route, and so there are not many direct buses to Ambiwali from Karjat or Neral. So it is a good idea to take the 7:15am Khaandas bus from Karjat, and alight at Kaashele. From Kaashele, there are many tempos available to go to Ambiwali. It takes about 20min. to reach Ambiwali from Kaashele by tempo. To come back to Kaashele from Ambiwali, there are buses till 4:30pm and tempos till 6:00pm; you may also find occasional dug-duggi.
Private transport, take to Mumbai – Pune Highway enter Express Highway and exit the express highway from the first exit (Shetung Phata) take the chowk route after crossing Karjat junction keep going straight; around 4 to 5 km before Kaashele keep a lookout for mile stone that will direct you towards Ambiwali; take right turn to head towards Ambiwali. Just as you enter Ambiwali you will find T-Junction as road that turns right. Park you vehicle here.

Start of the trek

From Ambiwali village, there is a broad mud path which gently climbs to Peth village at the base of the conical hill (5km, 90 min). The path offers good views of the surrounding valley on both the sides.

The Peth village is exactly as the base of the fort and you can see the walls of the fort. You go right across the village and here starts the second part of the trek. From a point there is a bifurcation. The easier route is from the left which goes around the fort with the fort staying to your right. There is a set of steps which will take you to the top. If you take the right side route, its much steeper but will get you faster to the top.
At the base of Kotligad are water tanks, and a huge cave with a temple inside it. There is also a water tank inside the cave with very clean water. In fact, the villagers of Peth draw water from this tank and one can see pipes going down all the way to the village.


To go to the top of Kotligad, one has to enter the cave and climb up a funnel along a staircase carved out in the inside of the pinnacle! This is the most interesting part of this trek, and it is a unique feature amongst the forts in this region. The staircase climbs up steeply, and near the top, it is no longer totally inside the pinnacle. There is a narrow gap in the pinnacle rock face along which it climbs, and here one can enjoy a cool breeze and a great view of the Konkan. The steps soon take one to the top of Kotligad, 20m above the cave. It takes about 45 min. to reach the top from Peth village. The top is circular and quite small. There is a small water tank here, and one can see remains of fort walls here. It is from the top that one gets the fantastic views mentioned above.

Nature Knights has an established local contact at Peth Village. To check out pictures of last our last trek on April 5, 2009 check out the link.
Posted by natureknights@gmail.com