Among the Top 10 Treks in the world and also the most unique...


In one of the mightiest mountains in the world "Karakoram Range", where most peaks are covered by snow almost round the year flows the mighty Zanskar River fed by many glaciers. The white waters of Zanskar River is famous for its gushing rapids of white waters that are popular for extreme white water rafting sport.

Zanskar river in the heart of winter freezes to form a sheet of ice or blanket and is known more popularly among adventurers world wide as "Chaddar", A journey on this remote and exquisite landscapes gives trekkers a glimpse of the world unlike any other place in the world. Its one of the top ten treks in the world.

Zanskar frozen river route (Chadar Route) was traditionally was used as a trade for locals living in Zanskar Valley who came through this route to Leh for trading during harsh winters of Ladakh.

The Chadar Trek includes 2 days in leh and 7 days trek in extreme cold conditions. It is a winter trek over a frozen river in Ladakh... Read on 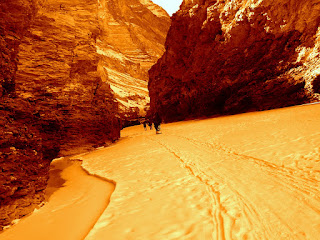