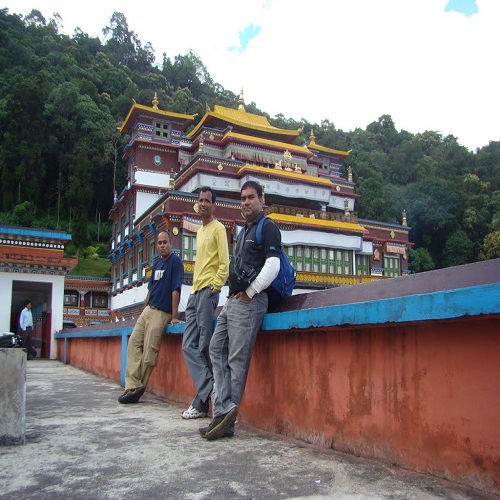 More about Sikkim..
Sikkim is a popular tourist destination for its culture, scenic beauty and biodiversity.
Sikkim is a landlocked Indian Stated nested in the Himalayas. It is the least populous state in India, and the second-smallest in area after Goa. The state borders Nepal n the west, Tibet Autonomous Region of China, to the north and east, and Bhutan in the southeast. The Indian state of West Bengal borders Sikkim to its south. The official Language of the state is English, but there is a sizable population that converses in Nepali. Nepali (the lingua franca of the state), Lepcha, Bhutia, and Limbu. It is the only state in India with an ethnic Nepalese majority. It is an ancient land also known as Indrakil, the garden of Indra, the king-god of heaven in Hindu religious texts. The predominant religions are Hinduism and Vajrayana Buddhism. Gangtok and is the capital and largest town.

Despite its tiny size, with an area of 2,745 square miles (7,110 square kilometer), Sikkim is geographically diverse, owing to its location on the Himalaya. The climate ranges from subtropical to high alpine, Kanchenjunga, the world's third highest peak, is located in the northwestern part of the state on the boundary with Nepal, and can be seen from most parts of the state.
Culture
The Gumpa being performed in Lachung during the Buddhist festival of Losar.
Sikkim residents celebrate all major Indian festivals such as Diwali and Dussera, the popular Hindu festivals. Losar, Loosong, Saga Dawa, Lhabab Duechen, Drupka Teshi, and Bhumchu are Buddhist festivals that are also celebrated. During the Losar – the Tibetan New Year – most government offices and tourist centres are closed for a week. Christmas has also recently been promoted in Gangtok to attract tourists during the off-season.


It is common to hear Western rock music being played in homes and in restaurants even in the countryside. Hindi songs have gained wide acceptance among the masses. Indigenous Nepali rock, music suffused with a Western rock beat and Nepali lyrics, is also particularly popular. Football and cricket are the two most popular sports.

Noodle-based dishes such as the thukpa, chowmein, thanthuk, fakthu, gyathuk, and wonton are common in Sikkim. Momos, steamed dumplings filled with vegetable, buff (buffalo meat) or pork and served with a soup are a popular snack. The mountain peoples have a diet rich in beef, pork and other meats. Alcohol is cheap owing to the low excise duty in Sikkim and beer, whiskey, rum and brandy are consumed by many Sikkimese - indeed, Sikkim has the highest alcoholism rate per capita of any Indian state.
Flora and FaunaThe Rhododentron is the state tree.

Sikkim is situated in an ecological hotspot of the lower Himalayas, one of only three among the Eco-regions of India. The forested regions of the state exhibit a diverse range of fauna and flora. Owing to its altitudinal gradation, the state has a wide variety of plants, from tropical to temperate to alpine and tundra, and is perhaps one of the few regions to exhibit such a diversity within such a small area.

The flora of Sikkim includes the rhododentron, the state tree, with a huge range of species occurring from subtropical to alpine regions. Orchids, figs, laurel, bananas, sal trees and bamboo in the lower altitudes of Sikkim, which enjoy a sub-tropical type climate. In the temperate elevations above 1,500 metres, oaks, chestnuts, maples, birches, alders, and magnolias grow in large numbers. The alpine-type vegetation includes juniper, pine, firs, cypresses and rhododendrons, and is typically found between an altitude of 3,500 to 5 000 m. Sikkim boasts around 5,000 flowering plants, 515 rare orchids, 60 primula species, 36 rhododendron species, 11 oak varieties, 23 bamboo varieties, 16 conifer species, 362 types of ferns and ferns allies, 8 tree ferns, and over 424 medicinal plants. A variant of the Poinsettia, locally known as "Christmas Flower", can be found in abundance in the mountainous state. The orchid Dendrobium nobilile is the official flower of Sikkim.


The Red Panda is the state animal of Sikkim.
The fauna includes the snow leopard, the musk deer, the Himalayan Tahr, the red panda, the Himalayan Marmot, the serow, the goral, the barking deer, the common langur, the Himalayan Black Bear, the clouded leopard, the Marbled Cat, the leopard cat, , the wild dog, the Tibetan Wolf, the hog badger, the binturong, the jungle cat, and the civet cat. Among the animals more commonly found in the alpine zone are yaks, mainly reared for their milk, meat, and as a beast of burden.

The avifauna of Sikkim consists of the Impeyan pheasant, the crimson horned pheasant, the snow partridge, the snow cock, the lammergeyer, and griffon vultures, as well as golden eagles, quail, plovers, woodcock, sandpipers, pigeons, Old World flycatchers, babblers, and robins. A total of 550 species of birds have been recorded in Sikkim, some of which have been declared endangered.

Sikkim also has a rich diversity of arthropods, much of which remains unexplored even today. The best studied group remains, as with the rest of India, the butterflies. Of the approximately 1438 butterfly species found in the Indian subcontinent, 695 have been recorded from Sikkim. These include the endangered Kaiser-i-hind, Yellow Gorgon, and the Bhutan Glory amongst others.
Climate
The climate ranges from sub-tropical in the south to tundra in the northern parts. Most of the inhabited regions of Sikkim, however, enjoy a temperate climate, with the temperatures seldom exceeding 28 °C (82 ° F) in summer or dropping below 0 °C (32 °F) in winter. The state enjoys five seasons: winter, summer, spring, and autumn, and a monsoon season between June and September. The average annual temperature for most of Sikkim is around 18 °C (64 °F). Sikkim is one of the few states in India to receive regular snowfall. The snowline is around 6 000 meters (19,600 feet).

During the monsoon months, the state is lashed by heavy rains that increase the number of landslides. The state record for the longest period of non-stop rain is eleven days. In the northern region, because of high altitude, temperatures drop below −40 °C in winter. Fog also affects many parts of the state during winter and the monsoons, making transportation extremely perilous.
Posted by Nature Knights